Gaylussacia
A genus that is closely related to Vaccinium ( the Blueberries ), the main difference is that the glossy fruits contain 10 hard seeds instead of fewer softer seeds contained in Blueberries. There are 40 species of Huckleberries, all of them native to the Americas.
The Huckleberries prefer moist, acidic ( ph 4.5 to 5.5 ), humus-rich, well drained soil in partial shade. While some species are found in the wild in full sun on peat bogs, conditions which are difficult to imitate in cultivation, other species native to woodland environments are relatively easy on the open wooded landscape.
Propagation is from layering, cuttings taken during summer and seed that is stratified before sowing.

Gaylussacia baccata ( Black Huckleberry )
A vigorous, clonal-colonizing, deciduous shrub, reaching a maximum size of 5 x 4 ( rarely over 3 ) feet, that is native to northeastern North America ( from southern Manitoba to Sault Ste Marie to Killarney, Ontario to North Bay, Ontario to Quebec & Newfoundland; south to southwest Arkansas to northern Alabama to northern Georgia to central North Carolina ). It can sometimes spread much wider after many years to form extensive colonies. In the Windsor/Essex County, Ontario region; it was abundant around Windsor as well as on the Ohio shore during the 1800s. It also occurred at Detroit during presettlement times but was rare. It is usually found in acid swamps and sandy or rocky forests in the wild. It is endangered in Minnesota, Iowa, Missouri, Arkansas, Alabama, Georgia and South Carolina.
The smooth-edged, elliptical leaves are up to 3 x 1 inches in size. The foliage is mid-green above, bright green beneath; turning to scarlet-red during autumn.
The pinkish-white, bell-shaped flowers, up to 0.3 inches in length, are borne during late spring.
They are followed by edible, fleshy, black berries, up to 0.4 inches wide. The sweet-tasting berries usually ripen mid to late summer and are great either eaten fresh, made into jelly or added to pancakes.
Hardy zones 2 to 7 in partial shade on acidic, well drained soil. 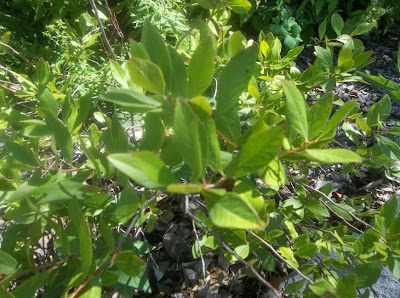 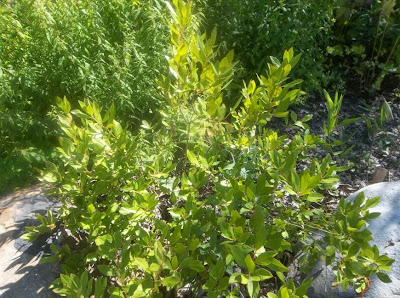 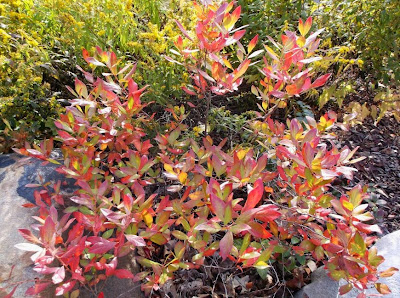 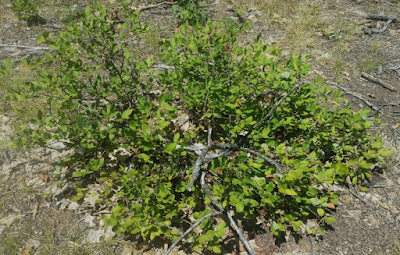 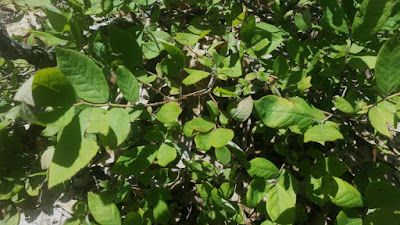 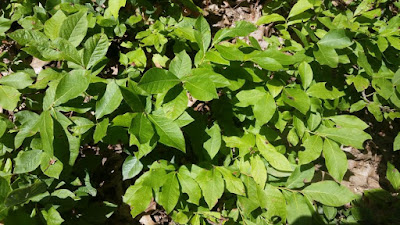 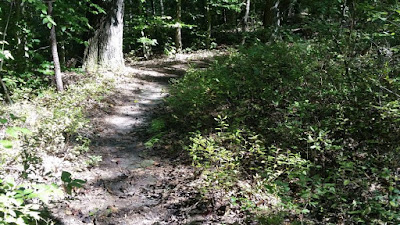 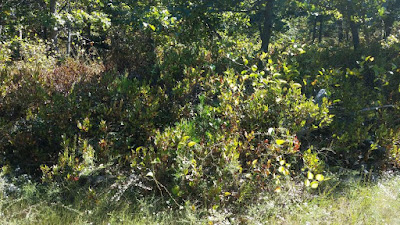 Gaylussacia brachycera ( Box Huckleberry )
A spreading, small, evergreen shrub, reaching a maximum size of 20 inches x 20 feet, that is native to the eastern U.S. ( from central Pennsylvania to Delaware; south to Kentucky and eastern Tennessee to Delaware ) where it is nearly extinct in the wild. It remains a small shrub for many years, however spreads at a moderate rate up to 14 inches per year with the roots self rooting as they spread, thus forming a dense groundcover. A single plant in Perry County, Pennsylvania, is considered to be the oldest living thing on earth. It is a single plant that clonally colonized over 100 acres ( nearly 1.5 km wide ) and is estimated to be 8000 years old. Due to the extreme isolation of existing clones even before Europeans landed in North America, it is believe that this shrub was once far more abundant and widely distributed before the previous ice age. In Pennsylvania it is now only known from Bedford and Perry Counties, extinct in Lebanon County.
The leathery, shallow-toothed, oval leaves are up to 2 x 0.5 ( rarely over 1 ) inches in size. The foliage is glossy deep green, turning to intense scarlet-red during autumn.
The white ( rarely pale pink ), urn-shaped flowers, up to 0.3 inches in length, are borne on racemes during late spring.
They are followed by bitter tasting, black berries, up to 0.5 inches across.
Hardy zones 3 to 7 in partial shade on very acidic well drained soil. It enjoys peat moss worked into the soil and a mulch of pine needles. Though difficult to propagate, it is hoped that this plant becomes a more common landscape plant in the future. It has potential to be the next hot groundcover. 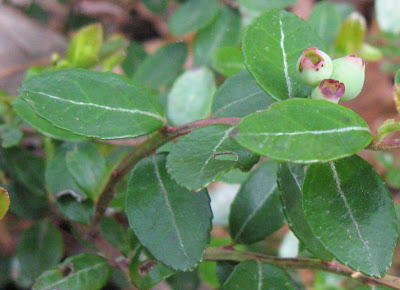 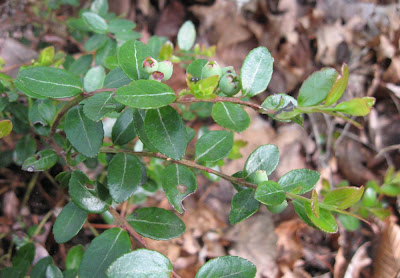 
Gaylussacia dumosa ( Dwarf Huckleberry )
Also called Gopherberry. A rhizomatous spreading shrub, reaching a maximum height of 2.5 ( rarely over 1.5 ) feet, that is native to pine barrens and sand woodland in eastern North America ( from eastern Louisiana to central Tennessee to central West Virginia to Newfoundland; south to southern Florida ). It is critically endangered in New York State where it was once more widespread on Long Island. It is also endangered in Tennessee. It is extinct in Pennsylvania and Delaware. Soldiers Delight Natural Environment Area near Reisterstown is among the few places where it remains in Maryland. While it is native to the Mid Atlantic U.S. and the Canadian Maritimes; it is mysteriously absent from New York State and New England. It is possible that native populations may have existed there in previous centuries but were destroyed before being documented. Clones resprout vigorously from underground rhizomes after forest fires. It is illegal to collect from the wild but through nursery propagated plants; Dwarf Huckleberry has potential to become the next hot groundover shrub.
The obovate or oval leaves, up to 1.6 x 0.3 inches in size. The leathery foliage is very glossy bright to mid-green above, whitish-green beneath; turning to red during late autumn.
Up to 8 white flowers are borne on racemes during late spring.
They are followed by juicy black berries, up to 0.3 inches wide, during late summer into early autumn.
Hardy zone 4 to 9 in partial shade on acidic, sandy, well drained soil. It is very heat and drought tolerant. 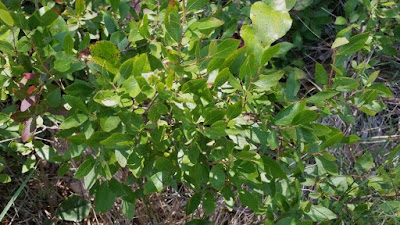 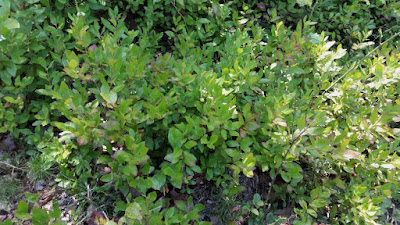 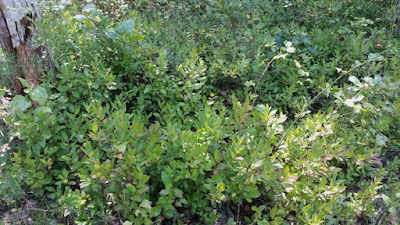 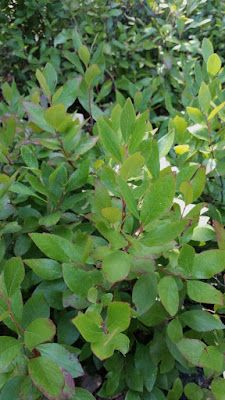 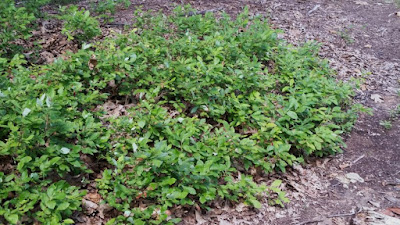 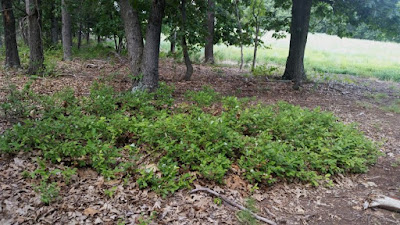 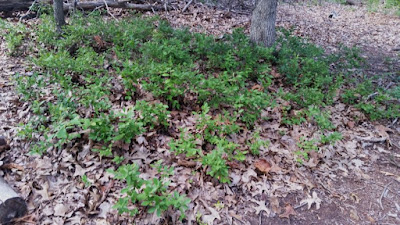 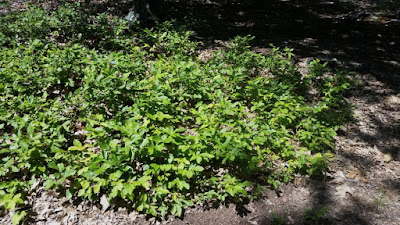 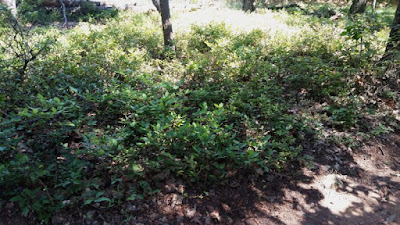 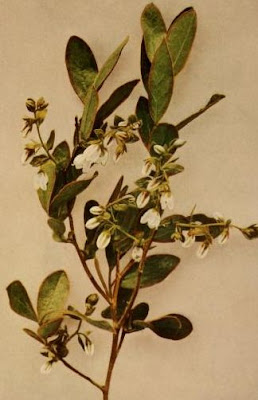 Gaylussacia frondosa ( Dangleberry )
Also called Blue Huckleberry. A shrub, reaching a maximum size of 9 x 6 ( rarely over 4 ) feet, that is native to swampy woods of eastern North America ( from eastern Ohio to western New York State to New Hampshire; south to Kentucky to Florida ). It is also often sound in acidic sandy pine or oak-hickory forests. It may be extinct in the wild in Ohio. Populations further south than South Carolina are often considered to be subspecies or even as an entirely separate species Gaylussacia tomentosa.
The oblong leaves are up to 2.5 x 1.3 inches in size. The foliage is dull blue-green to mid-green above, greenish-white beneath; turning to reddish-purple during autumn.
The light pink flowers, up to 0.5 inches wide, are borne during late spring.
They are followed by sweet-tasting, juicy, deep blue berries, up to 0.3 inches wide, during late summer.
Hardy zones 4 to 9 in full sun to partial shade on acidic, sandy, well drained soil. 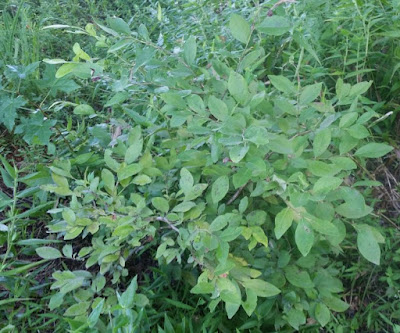 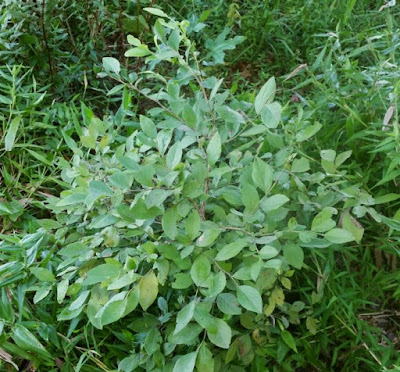 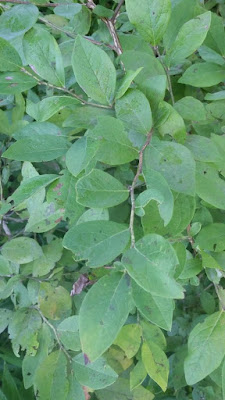 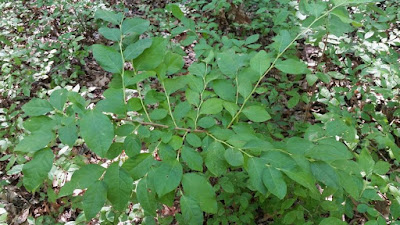 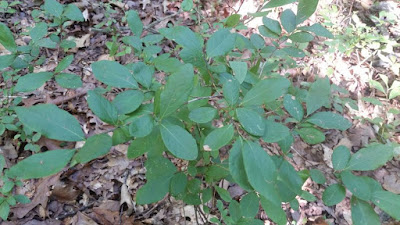 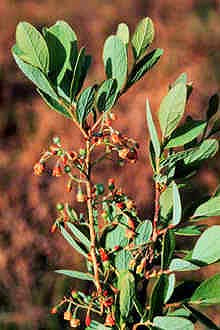 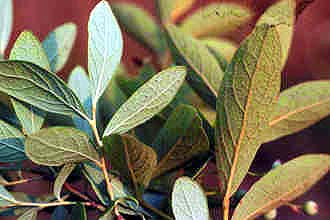 Gaylussacia orocola ( Blue Ridge Huckleberry )
A rhizomatous, small shrub, reaching up to 3.3 feet in height, it is one of the worlds rarest plants native to only a few acidic mountain bogs in western North Carolina. It has great potential as groundcover where growing conditions suit it.
The narrowly-oblong leaves are up to 1.1 x 0.5 inches in size. The attractive foliage is glossy deep green above, bright green beneath.
The white flowers, up to 0.2 inches long, appear in short racemes during late spring.
They are followed by edible juicy black berries.
Hardy zones 5 to 6 ( estimate...may prove hardier with testing ).

Gaylussacia ursina ( Bear Huckleberry )
A shrub, reaching a maximum height of 5 ( rarely over 3 ) feet, that eventually suckers widely. It is native to open deciduous or pine woodland in Tennessee, Georgia and North Carolina. It is often a dominant groundcover in mountain Pitch and Table-Mountain Pine woodland. Very long-lived; Bear Huckleberry may form extensive colonies after many years. This beautiful shrub has great potential as a landscape plant.
The ovate leaves are up to 4 x 1.3 ( rarely over 2.5 ) inches in size. The foliage is reddish at first, turning to mid green above, whitish-green below. The leaves turn attractive reddish-purple during late autumn.
The greenish-white flowers appear 4 to 6 on a raceme during late spring.
They followed by sweet-tasting, juicy, glossy black berries, up to 0.3 inches across.
Hardy zones 6 to 7 ( possibly 5 ) in partial to full shade on acidic, well drained soil.
Posted by Randy Stewart Landscape Designs at 11:52 PM No comments: