Pogonia ophioglossoides
A perennial orchid, reaching up to 2.6 ( rarely over 1.5 ) feet in height, that is native in full sun to very moist meadows and acidic peat bogs in eastern North America ( from Manitoba to near Hudson Bay in northern Ontario to Newfoundland; south to central Texas to southern Florida ). It is critically endangered in North Dakota and kentucky. In northern Ontario, it may also be found in tamarack/black spruce bogs. In the Windsor/Essex County region; it was abundant in the Windsor area during the 1800s, it has nearly completely disappeared due to the complete loss of the Black Swamp ecosystem as it was drained and converted to industrial agriculture. In southern Ontario, it remains most common on the Bruce Peninsula. In the past 4 decades, it has only been found in 6 of the 14 Ohio counties that it has been confirmed to naturally occur in the past. Destruction of wetlands and changes in water table has lead to steep declines in much of its natural range.
The pale pink flowers appear during early summer, usually lasting only 5 days. 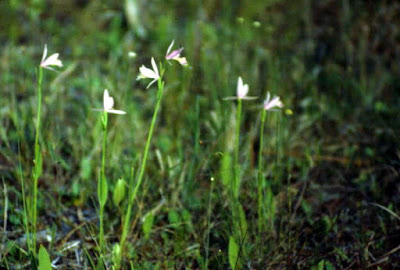 Posted by Randy Stewart Landscape Designs at 12:21 AM